Just over a month ago Iran hanged a drug dealer. He dangled at the noose for twelve minutes before being declared dead by the attending physician. The next day his family was granted permission to collect his body only to find he was still breathing! In the days following on from this there was great debate about whether or not he should be executed for a second time, with religious leaders proclaiming God had forgiven him.

This reminded me of a piratical tale I once read, but for the life of me could not find in any of my reference books… Well I’ve found him, and his name is Andrew Ranson – my first lesser-spotted pirate.

Ranson was a Northerner (the best of us are) and came from the wonderful city of Newcastle upon Tyne – a place close to my own heart. He was born in 1650 and little is known about his early days. By the 1670s however, he was in the Caribbean at the height of the buccaneer era, sometimes upon the famed New Providence and other times at Port Royal – both disreputable pirate havens. It was in one of these lawless places he met and married his wife.

As this was before the War of the Spanish Succession, Spain considered any other nation in the Caribbean to be smugglers and pirates. Trade with these non-Spaniards (even in peacetime) was outlawed throughout the Spanish colonies in an attempt to monopolise that part of the world.

Historical sources are sketchy as to whether Ranson was an opportunistic trader or hardened pirate – perhaps he was both. What is known is that he served aboard an English privateer vessel that failed miserably to sack the Spanish Floridas town of Saint Augustine after a storm scattered their bandit fleet. 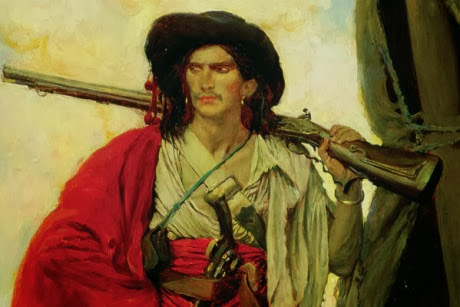 A buccaneer - as portrayed by the wonderful Howard Pyle.

The buccaneers – Ranson included – made their way north to find targets more befitting of plunder. Unfortunately this plan failed too, as they had been on land for a short time before being ambushed by Spanish soldiers and escorted back to the very place they failed to attack… The questioned buccaneers revealed their failed plans to the authorities, condemning themselves. Knowing the Spaniards and their fondness for rough treatment, this no doubt manifested itself in the form of casual beatings, stretched limbs, fingernail removal etc. However the methods, it seems as though the whole of the captured party named Ranson as their leader and as an experienced pirate raider.

A trial followed. Ranson’s companions were sentenced to a life of hard labour – most likely to one of the many mines within the Spanish Main. Ranson on the other hand was sentenced to death by garrotting. Whilst awaiting his grisly punishment, it is said Ranson prayed often with the local Franciscans. He begged for clemency from the governor too, but to no avail.

After months of incarceration his sentence was finally carried out – the garrote. A cord wrapped about the neck, the executioner ordered to twist. No doubt his swollen tongue popped from his mouth and his eyes bulged at the strangulation. 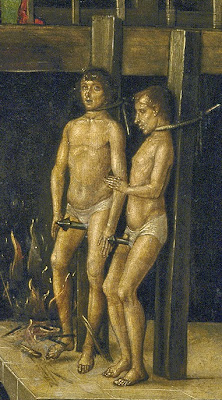 A garrotting - from 'Saint Dominic presiding over an Auto De-Fa' by Pedro Berruguete.

Accounts state the executioner twisted the garrote until Ranson slumped unconscious, but for good measure the executioner continued. The attending Franciscan monks chanted, the local church bells rang out. With the executioner’s final twist however, Ranson was granted a reprieve – the cord snapped – his body slumped to the ground.

The chanting monks rushed forward for the body, only to find the pirate was still living! Believing a miracle had taken place they quickly scooped up Ranson, taking him to a nearby convent before the governor, officials or soldiers could even question what was happening.

What followed for Ranson was an imprisonment lasting seventeen years, constantly moving between the convent and the local fort as the governor and Franciscans argued whether or not Ranson had been safely delivered by God, and deserved ecclesiastical immunity from the law, or whether he was a heretic and deserved to see the garrote for a second time.

In the early 1700s the War of the Spanish Succession began – a conflict I am most concerned about within my novels, pitting the English, Dutch and Holy Roman Empire against the French and Spanish. The English governor of Carolina raised a force of militia and marched south to Spanish Saint Augustine. They took the town easily, but failed to take the fort, and instead both sides were forced into a fifty-day siege.

Ranson, occupying the fort at the time, joined the fight on behalf of his Spanish captors. He must have acquitted himself well during the defence of the fort, for when Spanish forces from Havana broke the siege and the English fled, Ranson was pardoned for his crimes of piracy.

A reprieve from God and from the Spanish king at the expense of the best years of his life spent in captivity. Ranson may have regretted his dalliance into buccaneering, but we’ll probably never know – what became of him after this is unknown. Did he remain in Florida with the Franciscans? Did he seek out his wife in the West Indies? Or perhaps he returned to the North East of England…

The Iranian drug dealer by the way was similarly reprieved, and has been sentenced to a long spell in prison instead.

For a relatively detailed account of the Siege of Saint Augustine see the Wikipedia entry.

For an account of Ranson’s captured predicament and the background to the buccaneer expedition, see this online paper.
Posted by Unknown at 07:49