Pirates: They weren't all that bad (comparatively speaking!). 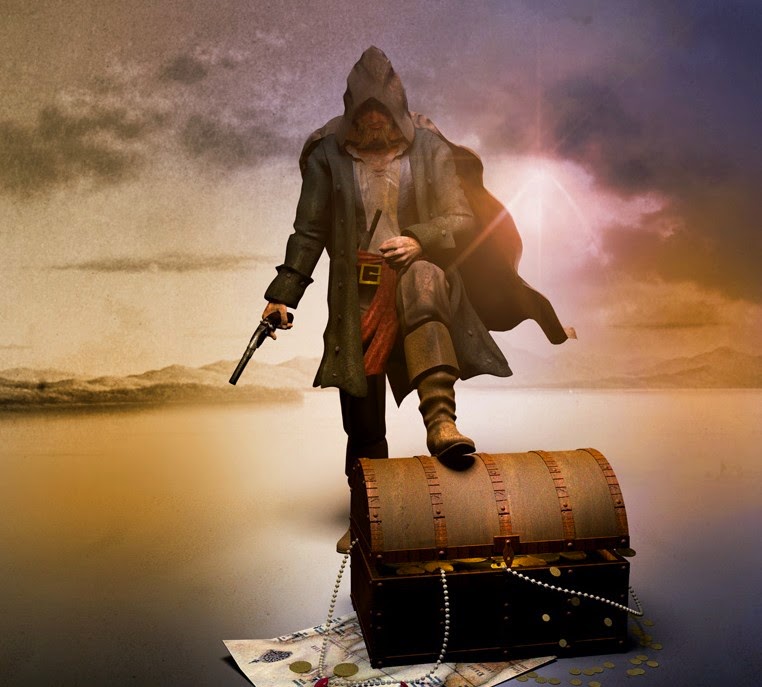 Recently a fellow author of Historical Fiction criticised my affection for pirates. They said they were sick of the romantic image of pirates, said they were nothing more than evil miscreants, and then went on to list the many misdeeds and wickedness that pirates committed. It seemed as though the author was sick of the image of the glorious pirate built up by Hollywood and swashbuckling novels. If you've ever read anything from my BUCCANEER series, you'll know that is not what I do. I have always hoped to maintain the gritty realism of the era. After all, anti-heroes are far more interesting characters than traditional heroes.

We all know - don't we - that pirates were not nice. We all know robbing from the rich (and the not so rich) and giving to yourself is a bad thing. We know that sinking a vessel with all hands aboard is no joke. That sacking Spanish towns and raping their inhabitants-- Well... you get the drift. Pirates were bad. Yes we know.

The point of this post is to show you that comparatively speaking, they weren't all that bad. Certainly pirates were no worse than the organised armies of Europe at the time, and actually, in some cases, they were a hell of a lot better. To understand why, I'll very briefly summarise piracy in the Caribbean:

Throughout the 17th century, Spain still had a complete stranglehold over the West Indies. The few English, Dutch, and French settlements on the smaller isles were attacked aggressively in times of peace and were blocked with trade stipulations. Non-Spanish merchants attempting trade with the Spanish of the New World were deemed smugglers, and if caught by the Costa Garda were either sent to the mines for life, or garrotted.  For the Spanish there was but one rule: In war or not, there was no peace beyond the line of the Cape Verde islands.

Adventuring in the Caribbean became a way out of a life of poverty, with many a man and woman starting their new life as indentured servants on English sugar or tobacco plantations.

Many of these labourers were mistreated, beaten, forced into greater debt, and their indentured sentences increased. Runaways bonded with shipwrecked sailors, those fleeing religious persecution, and sailors jumping ship. Communities of free men (and to a lesser extent, women) sprang up around the Caribbean, with work parties of mainly English and French daring to venture into Spanish territory in search of furs, meat, redwoods and other precious timbers.

The Spanish weren't happy with this. Conflict ensued. The buccaneers began to raid their enemy's ships en masse, and to sack and loot their cities.

Even in peacetime, did England object to their own displaced subjects robbing a rival of wealth? Not at all. In fact they encouraged it. In an attempt to undermine Spain's economy, English Naval officers such as Christopher Myngs were sent to the area. He rallied the disgruntled buccaneers to his cause, not by some notion of love to a monarch they didn't know, or an act of loyalty to their motherland. Their payment was uninhibited plunder of Spanish settlements.

Charles II of England was quick to condemn the attacks and recall any Naval officers advising the buccaneers, but the governors of Jamaica and other English colonies still encouraged it. And why wouldn't they? All the pilfered gold and goods passed by their hands first - and many a rich man became richer by aiding and encouraging the buccaneers.

Roll forward to the early 1700s. War was all over Europe and beyond, as Britain, the United Dutch Provinces, and their allies tried desperately to halt a young French nobleman inheriting the Spanish throne, and therefore creating a European super power like no other. This was the War of the Spanish Succession.

It was in this conflict the Duke of Marlborough won the Battle of Blenheim, that Gibraltar became part of British possession, and France became bankrupt (interestingly forcing the lower classes of French society into a deep poverty that would manifest itself later as the French Revolution). It was also in this war that many of the most famous of British pirates - Blackbeard, Jennings, Rackham - learnt their trade as ship-takers, both in the Royal Navy, and as independent roving privateers sanctioned by the state.

When the conflict was over however, many of these privateers simply carried on what they were doing, and despite the peace in Europe, many were still granted Letters of Marque by British island governors - legalising and encouraging their activities! These pirates were presumably still somewhat loyal to the British crown, and we have records of pirates flying the Union Jack from the fore mast and the Jolly Roger from their mizzen.

All right, I don't suppose so far I've defended them very well. I've told you they sacked cities, stole ships, and murdered people. But this was by no means unusual, and most of it was completely state-sanctioned and encouraged! The armies of Europe were no stranger to such misdeeds of violence either. You only have to look at the slaughter of the Native Americans, or the aftermath of any great siege from around Europe at the time to realise that rape, theft, and murder were the norm. Do we condemn and hate soldiers from history? Or do we glorify their victories and celebrate the success of our generals?

So at the very least, pirates were on par with everyone else at the time, but what made them better?

Whilst the rich of Europe were profiting upon indentured servants and the slave trade, pirates of the era seemed to stick two fingers up at the establishment (that's a British insult by the way). We all know how Africans were treated upon the plantations, and how they were sold and bartered for like a domestic breed of cattle; but did you know that pirates as a majority seemed to hold few ideas of racism? Contemporary sources estimate a generous twenty-five to forty per cent of pirates were either black African or mixed race. If you could fight, sail, and work hard, it seemed you were welcome regardless of skin colour. There are plenty examples out there, and I'm sure you can find some if you deign to look.

Now what else? Oh yes... The vote. The history of electoral reform in Britain is a long one. In 1832 (over a century past the Golden Age of Piracy) less than three per cent of Britain's population were eligible to vote. The change was a gradual movement starting from the mid-1800s lasting until the early 1900s. Pirates on the other hand, all had the vote! Every person signing the articles, regardless of sex, colour, religion, was welcome to vote on decisions that affected the vessel. A dream of equality of all it seems. And you must remember that this is a time when people were still being burnt for witchcraft and heresy for selling herbal remedies AND NOT GOING TO CHURCH! Pregnant women, baby and all, tossed into the fire to cleanse their wicked ways.

The persecution of 'witches' is a massive subject, as are the various religious purges from the world at the time. Search for them if you doubt me. Pirate crews consisted of Native Americans, Africans, and others following their own religions, of persecuted catholics from protestant countries (and vice versa), and even early atheists, all together in one wooden tub.

So how else can I defend my subject matter? Well there's the Republic of Pirates. Seventy years before the American colonies dreamed of becoming independent (seemed like a good idea at the time...) from the 'yoke of European tyranny' the pirates had established their own republic with its own code of conduct and loose ruling council, free from Europe's corrupt rich. A place where you earned respect and power; not born with both.

Oh, and there is also the controversial - and convincing - argument that pirates were open and tolerant of homosexuality too! (Which makes them more tolerant and modern than Algeria, Iran, Afghanistan, and Texas)

So to conclude. Yes the Hollywood image of the pirate is a false one, but then again Hollywood never seems to get many stereotypes correct; that doesn't mean pirates were all evil though. Certainly there were some bad eggs in the bunch, and they definitely did some terrible things, but their modern outlook and sentiments shouldn't be overlooked by our twenty-first century judgemental eyes.

Hats off to you pirates! Huzzah!

There's also the issue of their Accident at Work Policy, built right into their Pirate Code. I wrote about it here.

I dedicate this post to that fellow author who criticised my misguided affection of the 'despicable pirate'. Incidentally, they write about the noble knights of the Crusades - you know, that time when Christians clad in steel committed the most despicable hate and war crimes against Jews and Muslims.  :)
Posted by Unknown at 11:33